The New York Times Debunks Nothing About Hunter And China

After watching the impeachment hearings and listening to testimony, I found it hard to believe there could be so much discrepancy between what was said by one witness to the next when the testimony came from different parties. Talk about diametrically opposed.  It all made me certain one side or the other was lying or at the very least was uninformed or confused, so having questions I didn’t feel had been answered by anyone, I thought I’d see if I could determine anything for myself.


I have always been able to find my way around the Internet, so I decided to look into a few of the allegations and my searching led me to  an article titled, “Debunking 4 Viral Rumors About the Bidens and Ukraine” published October 29, 2019 in  The New York Times by reporter, Davey Alba. She wrote that these rumors are prominent falsehoods, and that what had actually happened would be explained. The site noted that disinformation is what the award-winning journalist covers, so I thought, finally, someone is going to remove the scales from our eyes and let us know what is going on and lay bare the lies.


I was really looking forward to seeing the truth and decided I was at least asking the right questions to have located the piece, and now some of those questions would be answered, but when they weren’t, this is the part of the article I decided to evaluate on my own.

The Bidens have each said they never discussed Hunter’s business in China.

The $1.5 billion figure Mr. Trump has referred to appears to be the amount of money a Shanghai private-equity company raised in 2014. Hunter Biden joined the board of the company, BHR Equity Investment Fund Management, in late 2013. In 2017, he bought 10 percent of the firm, investing the equivalent of $420,000.

How much Mr. Biden has earned from his deals in China is unclear. A lawyer representing Mr. Biden said he had never been paid for his role on the board, and had not profited financially since he began as a part owner in 2017 . Evidently I don’t understand what debunking means because I found nothing that debunked anything in her article.  All I found were responses  by an attorney to the rumors being questioned, and I didn’t see mention of how anyone knew that the answers and explanations being given were true. I would most certainly hope that people would be honest, particularly in matters of such great importance and interest to the nation as a whole, but in general I’m a skeptic, and I didn’t find any mention of the answers being evaluated by any technology that would determine their truth.  All I found in the Times piece was the necessity to believe without questioning, or doing any real research that the statements were valid. So much for debunking and disinformation.

The following examples are what I have found in reference to said rumor and while part is fact, and those parts will be noted, the rest is a common sense evaluation of all combined discoveries. I used the most logical tools on the Internet to aid me in this search  and anyone with Internet savvy could have found them and used them. My favorite is The WayBack Machine, or sometimes better known as the web archives. The only downfall with this tool is you have to work within the scope of capture times available, but thankfully all the sites I refer to were captured enough times that even without an exact date there is no doubt to be had when referencing a certain statement as the truth.

The Bidens have each said they never discussed Hunter’s business in China.

I guess then Hunter never mentioned to his Dad that it was Rosemont Seneca Partners, the company he started with  Eric Schwerin, Christopher D. Heinz and Devon Archer in 2010 that was one of the groups that formed BHR Partners to begin with in 2013. 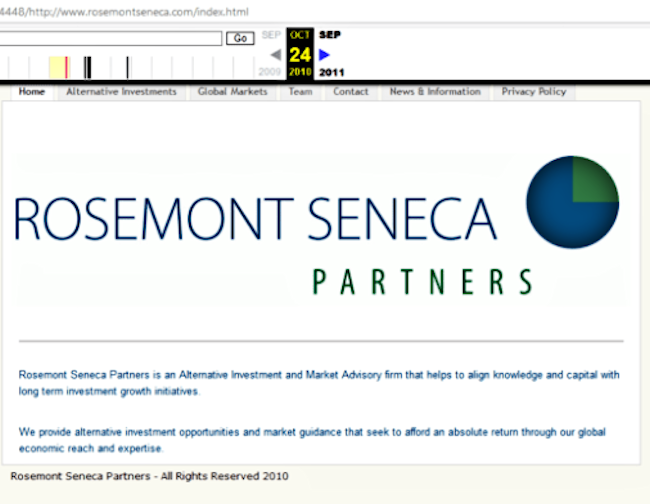 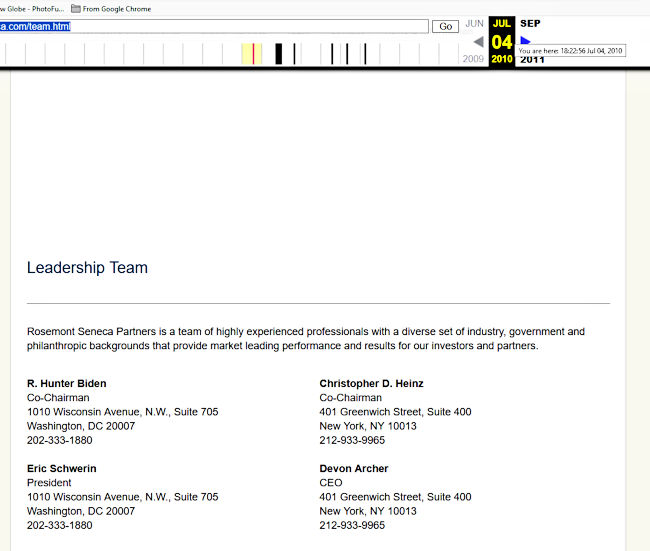 Seriously? No time during their moments together over the span of 6 years did he ever say a word about his involvement and the fact he was instrumental in its creation? The fact here is that those 4 men started RSP together and subsidiaries of same over the next few years and the parent company they all were a major part of was a main component in the creation of BHR. ( BHR Equity Investment Fund Management Co.,Ltd)  THAT is a fact.  See below.

You won’t see mention of Rosemont Seneca in the About Us in the current description though. I guess they figure out of sight out of mind, but there IS this record to help you form your own conclusion in comparison.  It’s very different from the original.  That is also a FACT. I wonder why… 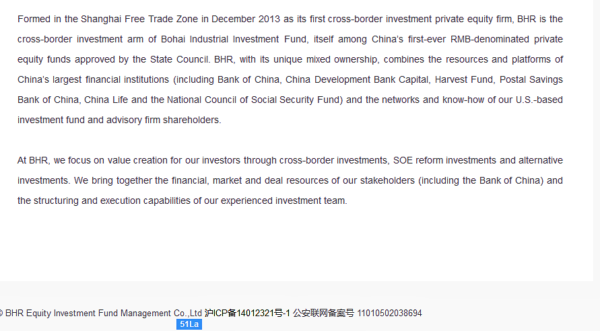 Also, the site today has the same domain name that was created for the company at the formation. When you access the ICANN information there have been no changes since that creation. They would be noted if there had been. Because information can change over time, ICANN requires registrars to provide each domain name registrant with an annual opportunity to review and correct their domain name WHOIS data. They also get a reminder that providing false data can be grounds for cancellation of their domain name registrations. Anyone who submits false data or fails to respond to registrar inquiries related to the accuracy of their data risks having their domain name be cancelled or suspended. Domain name registrants need to respond quickly to inquiries from their registrar related to the accuracy of their contact data to avoid cancellation or suspension after being formed that it had then. That is a FACT. 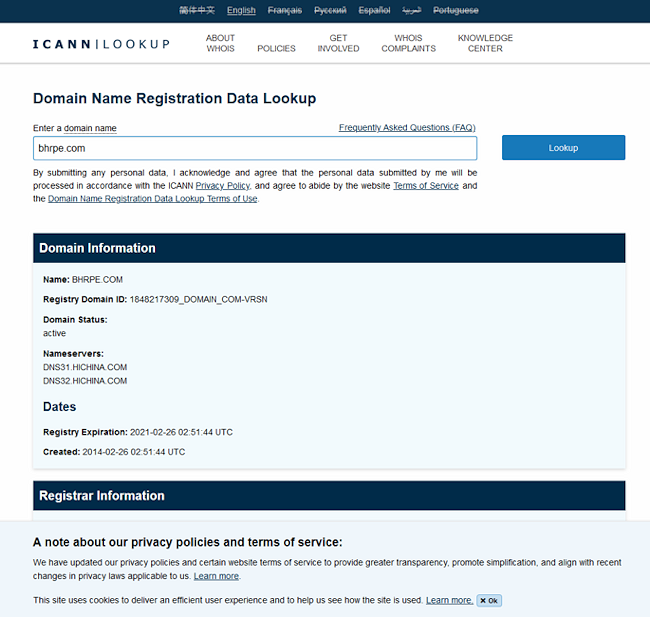 Hunter joined the board in late 2013.

Let’s see about that.  This capture wasn’t taken by The WayBack Machine (web archives), until the 4th of October 2014 but sure enough it shows that Hunter Biden,  (of Rosemont Seneca Partners) was included in the management team then, so giving them the benefit of the doubt, 2013 is reasonable.  Particularly as it tells us in the About section that his company, Rosemont Seneca, amongst a few others, started the business in 2013, long before the said purchase of 10% was to occur.  That is also a FACT.

I wonder if being one of the most influential individuals within that particular orbit, given his father’s position within the government had anything to do with being on the board or was that given automatically to creators as part of the perks of OWNERSHIP?  That’s what happens when you create something, you normally own it.  You at the very least have a percentage of whatever it is you’ve made or help come into being. But wait. I bet I have a screen shot of ALL the people on the board there within the same time frame. Devon Archer is right above Hunter in the list as Vice Chairman but the other two original partners of RSP are missing. Evidently they were smarter than their compadres.  There’s no point in speculating because I can tell from what I’ve uncovered so far, that the truth will never see the light of day concerning all of the different facets of this little get together that Daddy knew absolutely NOTHING about if an investigation is done with the same thoroughness  as the New York Times research. 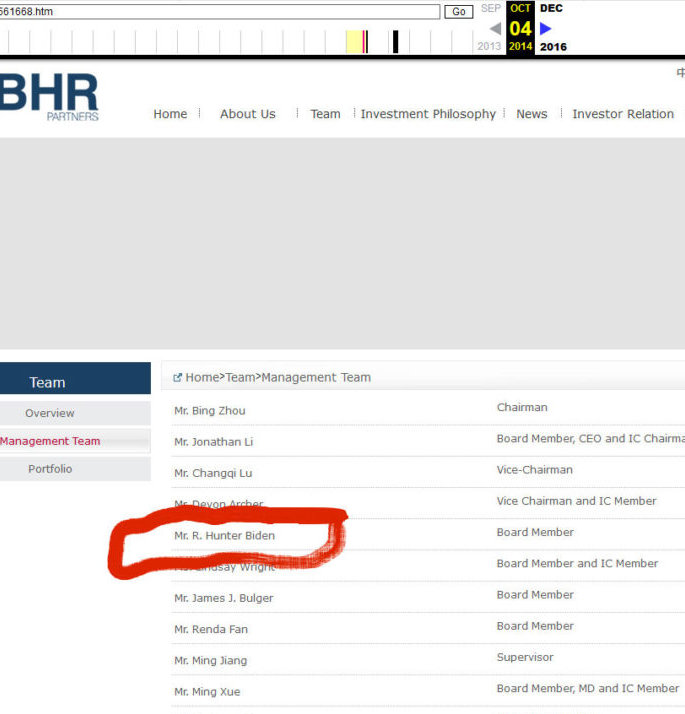 Here’s another thing that makes me wonder just how much were/are the creators, owners, board members, flies on the wall, serious about making this company appear to be a legitimate and a going concern?  I’m not saying that it’s not, far be it from me to understand those kinds of things except for one small issue.  This site, which NOW shows assets of over 2 Billion US dollars has no SSL certificate and although that may be said to be because of the following, why not move the information to a server outside of the country?


China has a fairly odd relationship with SSL/TLS. Many of the websites there do have SSL certificates installed, but the browsers in China don’t require users to actually use them. And there’s a reason for that. While best practice holds that you should encrypt your entire website – every page, every asset, everything – that effectively prevents the censors from being able to see anything at all. After all, the whole site is encrypted. This can lead to draconian penalties where China will outright ban an entire website when it’s really only trying to get rid of a couple of pages.

Does this sound like a good way to run a business that has so much capital at stake?  Who would feel really comfortable investing in such a firm?

Google will flag all the unencrypted internet by the end of 2017.

Google will flag 2/3rd of the web as unsafe.

This means if your website doesn’t have an SSL certificate, it will display a ‘Not Secure’ in the URL bar.  Look at the address bar on their site, it shows you a locked lock.  I’m not running any type of business or selling anything but I have one.

Despite what I think they must be picking up business in lots of places because when Hunter bought his touted 10% of the business, his share was reported as being worth 420,000 US dollars, but now only two years later the company claims to have assets worth the equivalent of over 2 Billion US dollars according to the Overview information found under the Team tab.

I guess Hunter’s just been there all this time for his health as no one seems to be able to find any financial recompense he’s received even though the firm he and his partners created were in it from the get go. Believe what you want to believe but understand this, there is something not quite right about all of this and surely the White House has investigative people who can find what I have even if The New York Times doesn’t. It seems they could care less about actually trying TO debunk anything.

I think they should be ashamed of themselves in saying that they did so, and they certainly shouldn’t have lied about explaining things. Not a damn thing was explained. I’m not a bit surprised that President Trump thinks the Biden’s should be investigated, especially after the things I found in the Burisma archives, but that’s another story. This right here is enough to convince me.

Wayback Machine, I salute you.